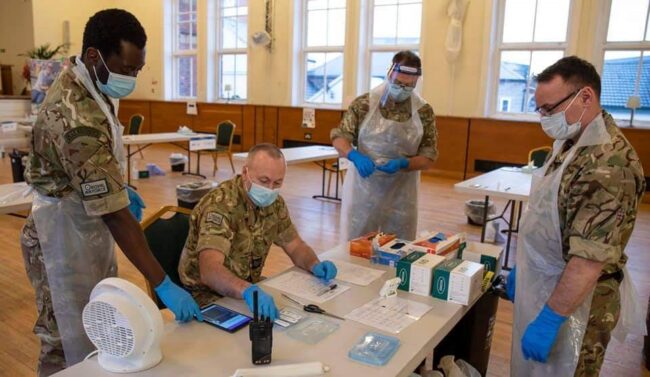 Consortio Security was thankful to hear from Squadron Leader Lee Rimmer about the contribution of SAC Shaba to the Greater Manchester Mass Testing Project for COVID-19.

A Consortio Security employee since 2013 and deployed member of the RAF Regiment Reserves, SAC Shaba’s role as a Testing Operative in the Salford area involved reception of members of the public, guidance through the testing process and analysis and recording of test results. Commitment also came in his off-duty hours, which were subject to strict COVID-19 restrictions.

Sqn Ldr Rimmer had the following to say about SAC Shaba’s contribution:

“SAC Shaba’s maturity and competence shone throughout his deployment, in particular his speedy assimilation of the testing process and his ease and authority in dealing with the general public.  He was comfortably able to adapt and change at very short notice as the task demanded and could be relied upon to think for himself and produce solutions to problems that may have impeded the process.”

“Overall, SAC Shaba can be proud of his contribution to the national effort in fighting COVID-19.  He responded well to rapidly changing circumstances and as a reservist deserves credit for volunteering for what was initially an ambiguous and potentially hazardous task during a national emergency.  His efforts enhanced the reputation of UK Armed Forces and of the RAF Reserves in the Greater Manchester community.”

We commend the dedication shown by SAC Shaba in a time of great national urgency and are proud to continue to offer employment to him between deployments to the RAF.